From Atlanta to Alaska, Portland to Pennsylvania, it seems as though nearly every inch of the country is being blanketed with snow this winter. For snow removal professionals on the East Coast and in the Midwest, this isn’t something new. Moving the white stuff is a frequent occurrence that begins as early as October and can last into spring. However, for several areas of the country, snow plowing is a whole new game.

Regardless of the frequency you plow snow and how much experience you have, every snow plow operator has the same goals and they all boil down to doing the job right. This includes plowing snow efficiently, with minimal property and equipment damage, and above all else, maintaining safety.

From better vision to enabling quick adjustments to versatility, here are five reasons a snow plow laser might be the next tool you’ll want in the toolbox.

1. Safety First
When it comes to any jobsite enhancement, it’s hard to find a stronger argument than safety. A snow plow laser establishes a wing or tow plow’s trailing edge location before the driver arrives at that point. This provides a two-fold benefit in that the operator’s visibility is enhanced by the bright laser, plus he or she has the opportunity to adjust course quickly and proactively. Not only does this make roads safer for nearby pedestrians, it helps the operator avoid hitting objects, cars, curbs, or other obstacles for reduced damage to both the equipment and other’s property.

2. Savings Next
Speaking of reduction in damages, the GL3000PMC has been shown to reduce plow strikes by 80% or more. The dollar savings of minimizing both property and equipment damage really add up quickly.

Additionally, the enhanced efficiency of plowing provided with a laser delivers better results, faster, saving both time and resources.

3. Guiding the Way
There are times when a plow operator is working on the road, after a storm. But more often than not, he or she is out there working in the middle of it – blizzards, freezing rain, sleet, and all. Because a laser helps show the pathway of the plow, it’s much easier for the operator to do a thorough job versus when vision is compromised.

This benefit is also huge for those who live in areas that don’t often see snow or those who are new to the task of plowing. The laser helps show drivers the pathway of the plow, allowing them to regularly see and learn the path, and enabling better operation for plow novices.

4. Faster and Cleaner
While the amount of cities that have seen snow this winter is alarming, perhaps more notable is the large dumpings of snow that have come at a time – from a few inches to a foot or more within just a couple of hours. To keep up and try to stay ahead of the continuously falling snow, plow operators need to work faster and clear snow better – both of which can be done with the help of a snow plow laser.

The enhanced visibility of the plow pathway takes the guesswork out of driving, giving operators a clear and more efficient path to plow. This leads to faster plowing and less time spent re-plowing to clean areas missed by the first pass.

5. Versatility
For many plowing professionals, snow business isn’t their only business. The GL3000PMC is a versatile laser that’s designed for both hot and cold weather. This allows it to be used for other applications, such as highway, pavement, and field striping. Virtually any vehicle or heavy equipment, for example, asphalt distributors, needing line control and guidance can benefit from a snow plow laser.

Whether you live in the south or north, Washington or Wisconsin, if you operate a snow plow, you’ve got an important job to do. Ensure it’s done right, done quickly, and done safely with the help of a snow plow laser.

Contact RDO Equipment Co. to find out how to implement a snow plow laser into your business. 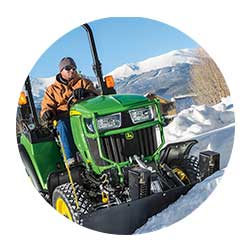