When a North Dakota-based heavy, highway, and municipal construction company accepted a high-profile job to build a multiple-mile-long stretch of Interstate 29 during the Midwest’s short construction season, they knew updating their equipment would be vital to the project’s success.

Sahr points out that Northern Improvement has built roads since 1935, and after meeting with team members, he recognized the construction company’s urgent need to source an ultramodern concrete placer and spreader to improve their roadbuilding’s productivity.

“The window to pave new roads is dependent on the weather,” Sahr said. “Jobs like these are dictated by temperatures and the concrete mix.”

Consistently the temperature needs to be above 45 degrees Fahrenheit to build smooth and solid roads, Sahr explained, and this year the North Dakota Department of Transportation kicked off its construction season officially on May 27. 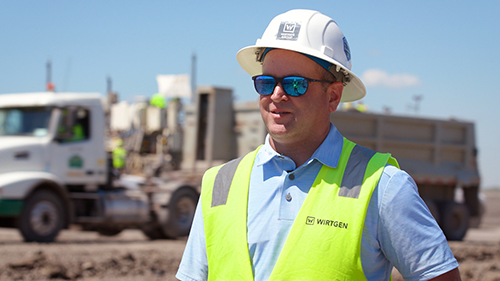 Eric Sahr, RDO Equipment Co. WIRTGEN Product Manager explains how he worked with the WIRTGEN GROUP to deliver the first – and largest – concrete placer and spreader in North America.

“This is a high production job, and we only have a finite number of days to pave,” Sahr said. “So, finding a machine that would be a consistent and fast paver was vital to ensure the road’s entire four and half mile stretch could be built in a timely manner.”

Because approximately 21,000 feet of I-29's southbound lanes needed to be reconstructed, Northern Improvement’s team required a high-production slipform paver. According to the American Pavement Concrete Association, slipform pavers are selected for large jobs because they have low-slump Portland Cement Concrete (PCC), so the concrete will hold its shape once it's placed along with high production rates, around 230 feet an hour.

To build these large, well-travelled highway lanes, dowel baskets and tie bar basket needed to be pre-placed approximately 3 feet apart, so Northern Improvement’s team needed to be able to supply concrete to the placer and spreader from what would be the highway’s west shoulder.

During World of Concrete in March, the WIRTGERN GROUP unveiled their complete concrete paving train, including the latest addition to its range of two-track placer/spreaders, the WPS 102i Placer/Spreader. A leading machine in a paving train, the WPS 102i travels over the pre-placed steel rebar tracks ahead of the slipform paver and the texture curing machine.

“The WPS 102i can be programmed to place and spread 12 to 40 feet concrete roads and up to 20 inches of thickness,” Sahr said.

Sahr says the WIRTGEN GROUP engineers were brought in to ask the right questions to figure out the proper delivery timeline and aftercare service needs to match the project’s requirements.

Sahr explains when road surfaces need pre-placed reinforcements, concrete can often only be supplied to the machine from the side. The placer/spreader travels in front of the slipform paver over the reinforcement, while a truck mixer feeds the belt conveyor with concrete from the side. This concrete is poured evenly over the tracks, in front of the slipform paver, and distributed across the road’s predetermined width. Once the concrete supply truck is empty, the conveyor belt can be folded away in a very short time to clear the path for the next truck.

Ultimately, Sahr said the Northern Improvement team felt comfortable with buying the concrete placer and spreader because it would significantly add to their productivity.

During early July, RDO team members and WIRTGEN GROUP engineers spent three days preparing the machine for work, leading up to a test run – one which left the Northern Improvement team impressed and confident they had made the right decision.

Watch the Series 1 WIRTGEN Concrete Placer and Spreader in action.