Because of the immense need created by the COVID-19 pandemic, veterans are suffering economic, housing, and mental health crises according to the Bob Woodruff Foundation. In fact, during April of this year, the Department of Veterans Affairs announced its initiative to rehouse at least 38,000 Veterans after 2020’s significant rise in veterans experiencing homelessness.

The Offutt Family Foundation responded to this need by challenging RDO Equipment Co. and R.D. Offutt Farms team members to nominate nonprofits serving veterans and their families for a Community Builder Grant. Altogether, 18 grants were awarded across the RDO footprint for a total of $195,000. These nonprofit organizations will be able to meet veterans’ basic needs, build community and empower veterans to live a purposeful life.

Check out why these employees nominated these nonprofits, and how these grants will help veterans throughout the U.S.

Fix It Forward received a $5,000 grant to help fund their work in removing transportation barriers. The organization uses volunteer labor, discounted parts, and donations to cover costs. Jeremy Jensen, Fix It Forward co-founder and vice president, says these funds will be used for more repair projects.

Howard Fulks, Director of Analytics at R.D. Offutt Company, nominated the nonprofit because transportation is foundational to living a productive life. 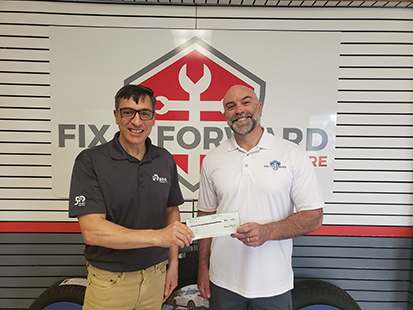 Central Valley Veterans, an all-volunteer, nonprofit that works to improve veterans' lives, was awarded $10,000 from the Offutt Family Foundation. RDO Equipment Co. Store Manager, Nhia Vue, in Fowler California submitted this organization after becoming aware of their need to fund their warehouse lease and essential services like providing food and clothing.

“We’re so grateful and amazed by this generosity," said Deborah Riordan, Central Valley Veterans board president. “Nhia was an amazing advocate for us and did all the hard work towards obtaining the grant." 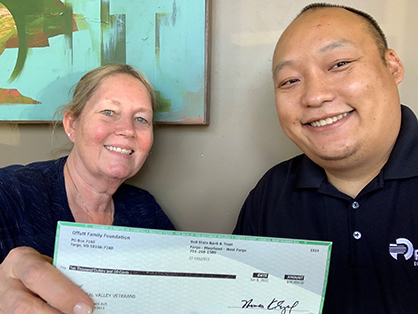 Flathead Marines, Inc., an organization supporting both active and non-active Marines based in Kalispell, Montana, received $10,000 from the Offutt Family Foundation after RDO Equipment Co. Parts Manager Mason Davis nominated them for a Community Builder Grant.

“We recently had a brother Marine attempt to end his own life and we had very limited funds to support his mother in her transportation and lodging,” Norton said. “This grant will allow us to provide for families in similar situations.” 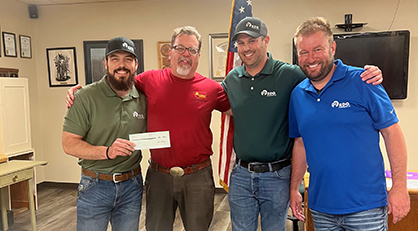 “As a veteran myself, I know the struggles veterans with Post Traumatic Stress Disorder face,” Zilverberg said. “The Sergeant Colton Levi Derr Foundation and the Derr family provide support and increase PSTD, TBI, and suicide awareness.” 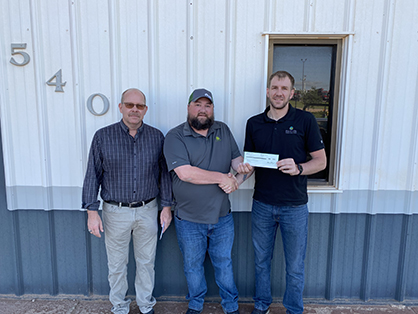 Aberdeen Area Veterans Inc., an organization focusing on serving veterans, received a grant for $15,000. Treasurer and AVVI member Thomas Croymans says this grant will help them to expand their reach through community events like community movie screenings about PTSD, blood drive, and “Out of the Darkness” suicide awareness walk. 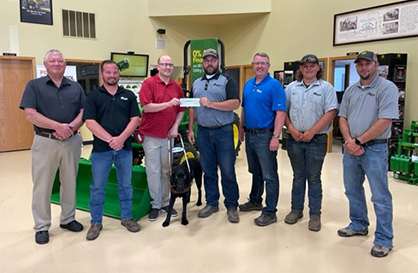 Staples All Veterans and Community Park Association received $5,000 after being nominated by Scott Salthe, a R.D. Offutt Farms Support professional in Staples, Minnesota. The Association will use the funds to buy engraved pavers for the park to highlight area veterans with their years of service.

American Legion Post 366 received $15,000 after R.D. Offutt Farms team member Jonathan Robbins nominated them. This American Legion Post in Wadena, Minn. will use the grant to expand its community outreach and education programs including their "Sponsor a Solider" initiative where school-aged children send care packages to a solider with a letter.

Ranten-Sundflot Post 288, in Brooten, Minnesota received a $15,000 grant after Rick Knutson, a longtime Offutt Farms team member who also served in the Vietnam War, noticed the local park fell into disarray due to lack of funds. The American Legion Post will use this money to replace the community's Vietnam Memorial.

Fargo AMVET Post #7 will use their $5,000 grant to become handicap accessible after a Hollie Ibach, an accounts payable representative, highlighted their need to make their space inclusive environment for veterans who may have disabilities.

“The Fargo AMVETs are always striving to help veterans in any way possible,” Hollie said. “The organization provides a supportive environment, entertainment, usually a meal for veterans that otherwise wouldn’t be able to attend.” 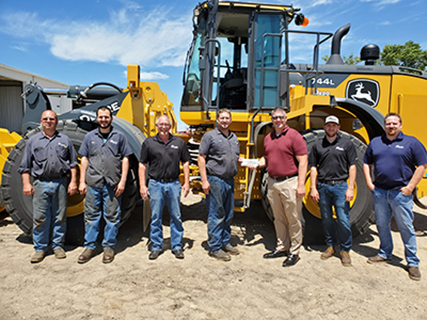 “We were unable to be open for almost two years,” Ingram said. “This will help us make some much needed building improvements and better support area veterans." Victor B Wallin Post 12 received $10,000, nominated by Patrick Frohlich, RDO Equipment Co. store manager in Washburn, North Dakota, because of their work in his community. This post will use the funds to further develop the Veterans Memorial Park. 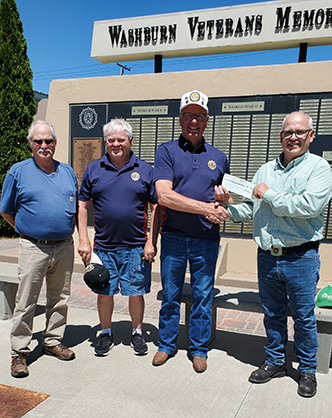 American Heroes Outdoors – a nonprofit focused on hosting veterans and their families on hunting and fishing adventures – received $15,000 to build a “Patriot House” ice castle. Adam Gilbertson, a veteran and RDO Equipment Co. Vice President of Midwest Construction and Integrated Controls, nominated the organization because of his connection to its founder.

“When I was deployed to Iraq, my youngest soldier was a Concordia College graduate named David Morse. He turned 18 before we deployed,” Adam said. “When David returned to Park Rapids, he founded American Heroes Outdoors.”

This wasn’t the only organization that Adam nominated, though, as he splits his time between Minnesota and Montana. 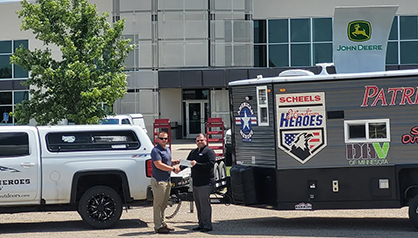 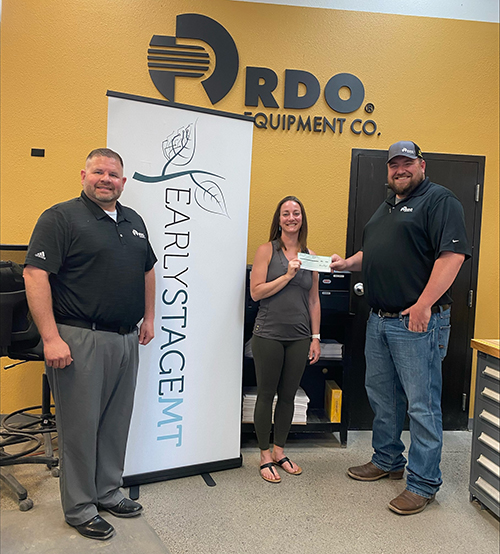 Mandatory Fun Outdoors received $5,000 to build a “Garden of Honor,” for veterans and their families to grow vegetables in Park Rapids, Minnesota. This organization was nominated by Offutt Farms team member Patrick Focken and encourages veterans to go outdoors.

Veteran Overland will use its $10,000 grant to buy an overland vehicle for veterans to use for “overlanding” outings— a self-reliant adventure that allows them to travel to remote destinations where the journey is the primary goal. RDO Equipment Co. Store Manager and veteran Ollie Windle nominated the organization because of the group’s camaraderie.

In fact, Ollie joined Veteran Overland’s board last month and will help to organize training opportunities including first aid and off-road skills. 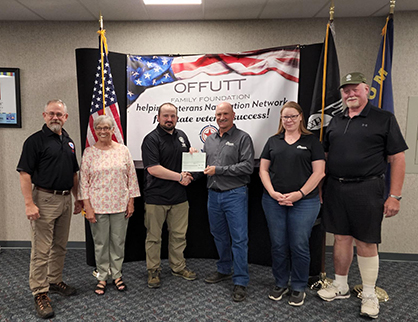 Through the Community Builder program, the Offutt Family Foundation has awarded more than $1.5 million in grants since 2015. The program builds on the spirit of community involvement embedded in RDO culture and embodied by team members.

RDO Equipment Co. embodies a stakeholder philosophy, serving all those who make our business what it is. See the ways our team members impact the communities in which they work and live.