Listen Up! Go Behind the Scenes of the Agriculture Technology Podcast

It began as audio blogging in the 1980s.
In the early 2000s, it saw its first evolution with broadband Internet and devices like the iPod.
More than 115,000 English-language variations are available.
Today, more than 32% of Americans listen to them at least monthly.

It’s the podcast. And it’s growing in popularity every year.

In 2016, RDO Equipment Co. launched its first podcast, The Agriculture Technology Podcast. Tony Kramer, Product Specialist Supervisor in the Midwest Ag region, serves as host, producer, and overall driver, doing everything from planning topics and lining up guests, to recording every episode and tracking listenership. 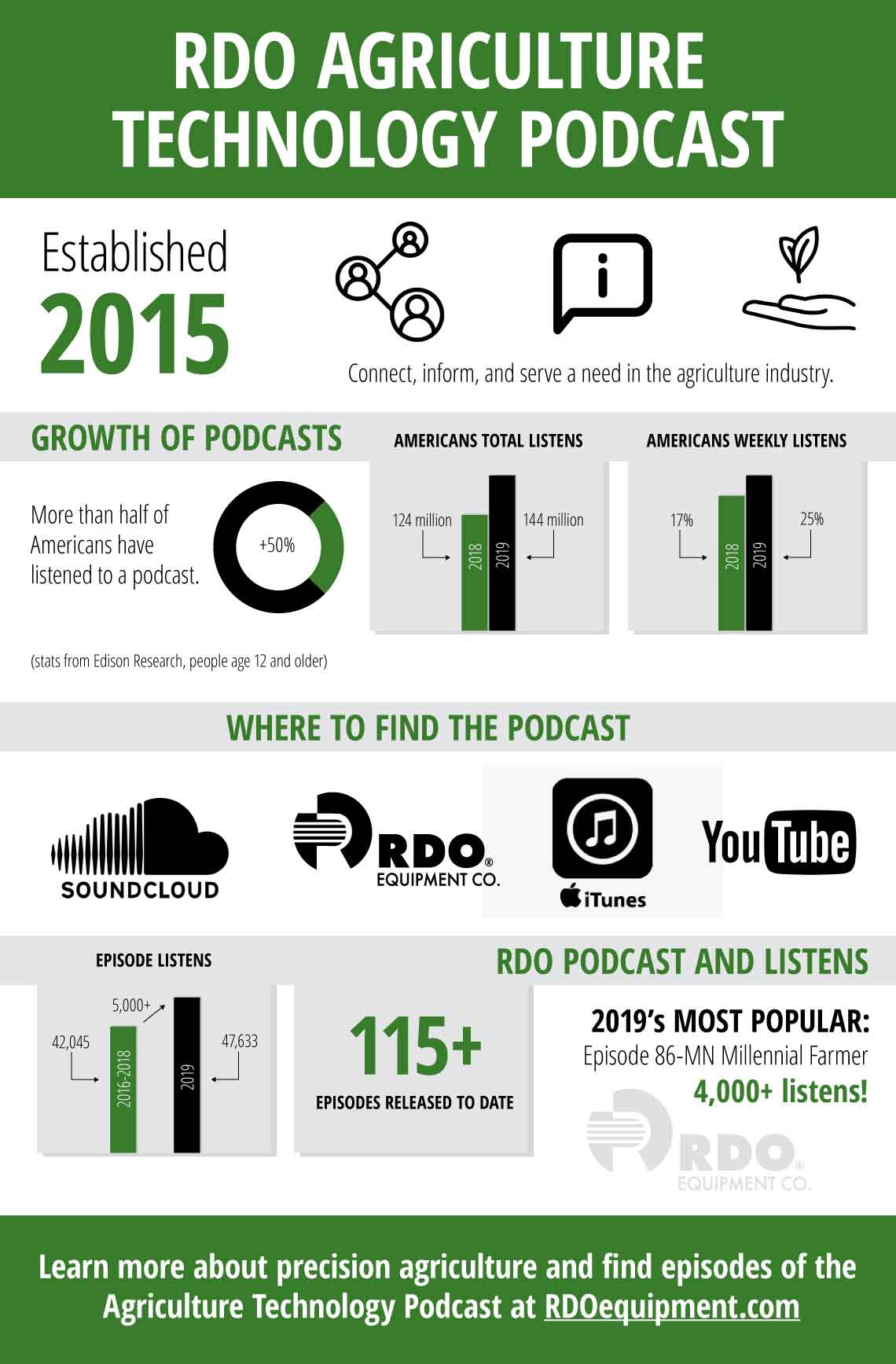 FAQs
Because of his role in building RDO’s first podcast – and a popular one in the industry – Tony gets a lot of questions, everything from, “What editing software do you use?” (Adobe Premier) to, “Where can I listen to the podcast?” (lots of places!).

For anyone who’s ever wondered more about the Agriculture Technology Podcast or, maybe even more so, how a podcast comes to life, Tony shares a behind-the-scenes look.

1. Why did RDO start a podcast?
It was the podcast’s founder, former Agronomist and Product Specialist Supervisor, Nate Dorsey, who first identified the opportunity of creating a podcast.

“Nate spent a lot of time in his truck, ‘windshield time,’ as he called it, visiting customers and driving from one field to another,” Tony said. “It dawned on him that other trusted advisors and farmers had a lot of windshield time, too. A podcast would be a great way to connect with them, behind the wheel when they weren’t surfing the web or checking social media.”

Joel Kaczynski, Product Specialist Manager, recalls a similar story that opened his eyes to the value and opportunity of a podcast.

“I was visiting with a customer and he asked me about company that John Deere had just acquired that day,” Joel said. He was surprised this customer already knew of this news so Joel asked him where he heard about it.

“His hired man was listening to a podcast in the tractor that day and told him about it,” Joel said. “That’s when it hit me that our customers are using podcast to keep up-to-date with changes in agriculture.”


Joel believes there’s a bright future for the podcast, too, especially as equipment becomes more automated, he believes operators will continue to maximize their time in the cab and listen to podcasts.

2. Where do you record the podcast?
Whether in his home office or over the phone as he does these days, to at a tradeshow or even in the cab of a tractor as he has in the past, Tony is set up to record the podcast pretty much anytime, anywhere.

All of Tony’s recording gear, including microphones, his headset, and an iPad, fit in a backpack.

“That backpack is my studio,” he says.

3. Are podcasts recorded in one take?
Some episodes of the podcast are done with minimal edits or even in one take – but that’s not always the case. While every episode is created to be a relaxed conversation between Tony and his guest, it does take some finessing.

“It’s not uncommon for people to get nervous, so they may want to answer a question differently or redo something,” Tony said. “If that’s the case, we start over and try again, then, through editing, it appears seamless to the listener.”

4. How has the podcast grown and changed since the first episode?
From Ada, MN to Australia, one of the biggest changes the podcast has seen is the reach and expansion of listenership. And listeners have grown in other ways, too.

Another change is the mix of guests. The podcast’s early episodes featured mostly RDO team members as guests. Now, that pool has broadened to extension educators and professors, manufacturing partners and media partners, while still including plenty of RDO team members in the mix.

5. Why should I listen to the podcast?
Whether a grower, trusted advisor, or RDO team member, Tony hopes there’s something everyone can learn from listening to the podcast.

“The goal is to share information that’s not common knowledge and the hope is that it opens everyone’s eyes to some of the challenges, different technologies, and what’s going on in the ag industry,” he said.